The Languages of Esperia

Also known as Dragons' Words and Old Tylwyth, it is believed that Slihrth originated from dragons teaching their words to both the Fae races of Esperia and the Idonai (or First Men) of Munidea. The language was originally used by the wizards of old to cast spells before the formation of The Order and codification of modern magic.

Today, only relics from antiquity and books that escaped the torch bear remnants of this long dead language. Slihrth script is read laterally, from right to left. 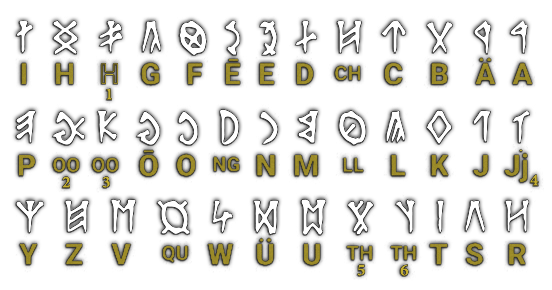 The language of the Aelvar, Tylwyth, is often referred to as “elfish” by non-speakers. The seemingly cryptic phonetics and lengthy words are nearly incompressible to most outsiders. Non-native speakers have remarked about the cumbersome pronunciations.

Tyl-Ysgrifen, the written form of this elfin language, is based on trees and other foliage. This possibly logographic throwback to now dead languages reveals a cultural heritage surrounding forests and flora. Its sentence structure begins with punctuation and ends with a universal "cap." The alphabet is strung along straight lines, broken by caps, and can be read laterally (left-to-right) or vertically (top-down).

Tyl-Ysgrifen is written along a straight line. Breaks only occur between sentences. Punctuation is located at the start of each new sentence line. All sentences end with the same "cap."

The separation of words is created by the unlisted "Leim" alphabet character -- which is displayed as a continuation of the sentence line (equal to a character) between each word. Commas, within sentences, are represented with double, sometimes triple, Leim between words.

Vowels are represented by "Síolta" ("Seeds" in Tylywth)  while consonants represent the branches of "Goddeau" ("Trees" in Tylwyth).