From The Ashes, We Begin Anew!

One minor setback won’t destroy everything. Well, having a colossal failure from my previous webhost sure seemed like more than a “minor setback.”

About two weeks ago, just in time for my birthday, I was informed that my website’s images weren’t being displayed properly. Jumping onto the website immediately, I found this issue – none of the books on display possessed any images on the desktop version of the website. What gives?

Well, I logged onto my webhost site and found the culprit – an automated update to my SQL server had caused corruption and wasn’t compatible with some features of the site. Not to worry! I could just rollback the SQL server update and remedy the issues. Boy was that a wrong assumption! It completely nuked my site like it was nest of xenomorphs on LV-426 and it really pissed off Sigourney Weaver!

Surely, a quick call to tech support would remedy the issue…right? Riiiight?

Well, after finally getting through after a LONG weekend, I was informed that the webhost didn’t actually provide any kind of backup & recovery services on request. However, I did have access to some DBs I had backed up (using the webhost’s manual services about a year ago). I was instructed to manually download the desired file and attempt to restore it on my own. That didn’t work at all. The webhost’s restoration feature didn’t recognize the SQL formats and kept failing. After repeated attempts to remedy this with “support” once more, I was forced to jump ship for greener pastures and seek out a new webhost.

The good news: you’re able to read this because I have found a great new webhost to park my www.infinitalechronicles.com domain.

The bad news: I lost everything from the previous website that wasn’t stored in a word document or image file. Yep – I’ve had to rebuild the entire website from scratch. This is why there are no news entries prior to this one now.

This also means that all backers of the Digital Edition (including backers using those cool NFT cards that link you to your Digital Edition PDFs) are no longer able to access and download their Digital Edition PDFs that they paid for. Hopefully, the PDFs have already been downloaded prior to this catastrophic Charlie-Foxtrot from my previous webhost. If not, please reach out to me on Twitter @InfinitaleComic or via Indiegogo with your backer number and the name used for your order and I will remedy this as soon as possible.

In the meantime, I’ll be rebuilding the “Lore” pages (back to where they were prior to the disaster). I have also added some interactive, 15-page sneak previews of currently released and in production books for you to check out! The slick, new book-viewer format allows you to read the first 15 pages (or so) of each book to get a small taste of what’s contained within the full book!

Hopefully, I’ll have better news to bring you in the not-too-distant future.

From The Ashes, We Begin Anew! 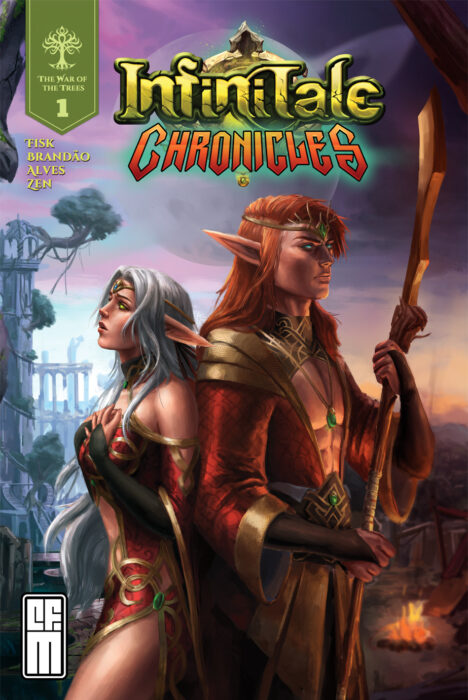 Chronicles Merchandise The War of the Trees